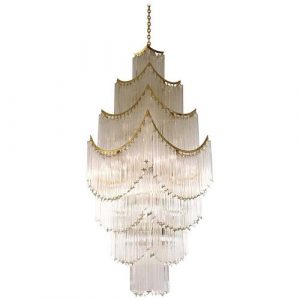 French artist Gaston Sébire is known for his landscapes, seascapes, still lifes, and flowers. Although he began painting at the age of 18, Sébire did not gain recognition until his forties. An engraver and painter of theater decorations, Sébire’s works did not follow industry trends but rather focused on beauty, light, and colors. The upcoming New York City Estate Auction, offered by Showplace Antique + Design Center, will feature a floral still life painting by Sébire. The piece shows a spray of flowers in a blue and white vase.

A Renaissance painting by Francesco Curia is also highlighted. Titled Ascension of Christ, the painting shows the apostles kneeling in prayer. Curia frequently worked for the churches of Naples and a note that comes with the painting describes his continued popularity in the city. Also available is a  75-piece Gorham Etruscan flatware set from 1913. The symmetrical Etruscan pattern was a forerunner for later Art Deco designs. Browse the full catalog and register to bid on Bidsquare.