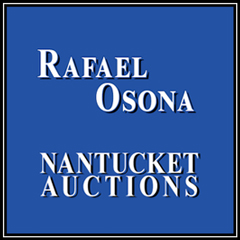 Founder and director of Nantucket’s oldest gallery, the Stark Gallery on Old North Wharf, Robert Stark Jr. was also an American Luminist painter who approached his scenes with a modernist’s eye. Known primarily for coastal subjects, often with an iconic red sailed catboat in the middle to far distance, Stark painted with a technique that concealed visible brushstrokes and evoked a sense of calm. This is the case in the six works by Stark up for bid in the Independence Weekend auction from Rafael Osona Auctions, including one of his trademark catboat paintings, titled Red Sail on Calm Water.

Items in the catalog were sourced from Nantucket homes and seaside estates, as well as five estates from Pawleys Island, Palm Springs, Boston, Albany, and New York City. Anchored by over 300 lots of fine and decorative art works, the sale also features over 140 pieces of fine furniture, such as a set of six Stephen Swift cherry and ash pomfret dining chairs and a set of four cherry and ash bar stools. Other items include pearl necklaces and other jewelry, a hand-knotted Persian Heriz natural wool carpet, Bill and Judy Sayle nested Nantucket swing handle and friendship baskets, and more. Visit Bidsquare to browse the full catalog of this and other online auctions.