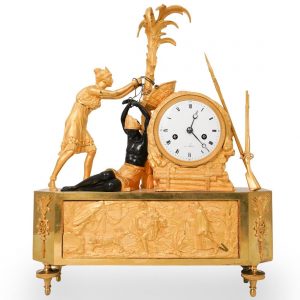 The story of Atala and Chactas was an 1801 literary success that propelled its author, François-René de Chateaubriand, to both fame and political appointments. It told of a Native American man who was freed from his kidnapping by a compassionate Christian woman named Atala, who was the daughter of a local chief. Chateaubriand’s story is visually depicted on a 19th-century French Empire mantel clock, presented in Akiba Antiques’ upcoming Eclectic Collection of East Coast Estates auction. Executed in gilt bronze, a panel below the central figures and clock dial shows the tragic ending of the main characters.

Mantel clock collectors will also find a bronze and rouge marble piece in the listings. This clock shows a bearded Hercules carrying the world on his shoulders and features an eight-day movement. Another timepiece on offer is a Patek Philippe World Time ref. 5131J-001 wristwatch. Designed in the 1930s, the World Time watch has long attracted attention for its simultaneous display of 24 time zones. The available watch is among the most recent editions. It is centered on a cloisonné enamel version of the world map. The globetrotting wearer can see the time everywhere from Paris to Auckland around the edge of the dial.

Other key items in the auction include a pair of antique vases from Moser, one of the Czech Republic’s leading glass manufacturers. More than 160 years old, the company specializes in traditional Czech crystal and glass. The available vases were made in the late 19th or early 20th century and are covered in enamel bees, fireflies, and multicolored leaves. Fine art from Barry Leighton-Jones, Constant Joseph Brochart, and Marc Chagall will be up for bid as well. Visit LiveAuctioneers for the complete catalog and to place a bid.