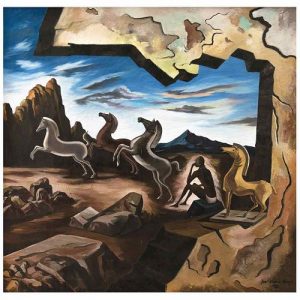 As president of Mexico from 1861 to 1872, Benito Juárez repelled a foreign invasion from the Archduke of Austria and pursued democratic reforms. One of the highlighted lots in the upcoming Latin American Art Auction, presented by Morton Subastas, is a portrait of Juárez painted by David Alfaro Siqueiros. The portrait is dated 1971, almost 100 years after Juárez’s death. Siquieros is remembered as part of the Mexican Muralists movement, which also included artists such as Diego Rivera and José Clemente Orozco.

Rivera is also represented in this event with a portrait verified by his grandson, Juan Coronel Rivera. The portrait’s subject wears a layered necklace and looks directly at the viewer. Outside of Mexico, collectors will also find a painting by contemporary Peruvian artist Alfredo Alcalde García. The work’s title, Eros y Tanatos, evokes the Greek god of love (Eros) and the god of death (Thanatos). Interested collectors can view each lot and register to bid on Bidsquare.