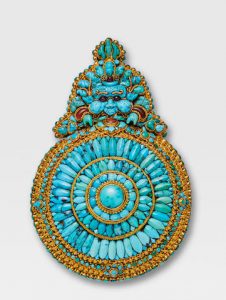 Another highlight is an early 1900s turquoise and gold Mooneater or Cheppu brooch. The ruby and carnelian brooch was a popular piece of Tibetan jewelry. The pin has gold filigree work on the bottom, a carved kirtimukha face, and a finial on top. The concentric lotus discs signify the potential to achieve enlightenment. The talisman kirtimukha is known to protect one wearing the Cheppu. Also offered are paintings illustrating scenes from the Bhagavata Purana and the Kalpa Sutra manuscripts. One highlight is a Darbar scene with Sansar Chand of Kangra and Jai Singh Kanhaiya. The early 19th-century opaque watercolor and gold on paper piece is attributed to Bassia or Shiba. The typical Darbar scene includes a converging diagonal arrangement originating from Mughal artworks. The Indian, Himalayan, & Southeast Asian Art auction also features copper, black stone, terracotta, and wood figurines. Interested collectors can explore the full listings and register to bid online on Bonhams.