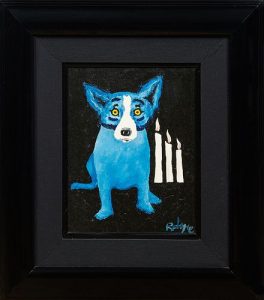 In the face of a changing world, artist George Rodrigue sought to preserve the Cajun culture through his art. His Blue Dog painting series, based on Cajun loup-garou legends, led him to popularity in the art world. Available on the second day of this three-day auction is an oil painting from Rodrigue’s series titled Flames of Hope. “The dog never changes position. He just stares at you. And you’re looking at him, looking for some answers… and he’s just looking back at you, wondering the same,” Rodrigue told The New York Times in an interview.

The Important September Estates Auction, offered by Crescent City Auction Gallery will feature a selection of porcelain, ceramics, and decorative art. One leading lot is a porcelain cabinet plate. Accented with detailed mythological scenes depicting Hercules on Forket Road, the 20th-century piece bears a Royal Vienna mark. Examples of porcelain from Meissen are also offered alongside Sèvres porcelain and an Art Nouveau vase. Visit Bidsquare to explore the complete listings and to place a bid.