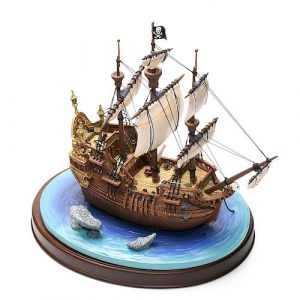 From the 1920s through the late 1980s, Castleton Sunnyvale was one of the leading dinnerware manufacturers in America. One of the company’s dinnerware sets is available in the upcoming Holiday Estate Auction & Liquidation, offered by Whitley’s Auctioneers. The complete dinnerware set is decorated with floral designs and golden rims. Besides dinnerware, the sale includes a large selection of 20th-century decorative arts.

Included from the Walt Disney Classics Collection is a sculpture from Disney’s Peter Pan. It depicts Captain Hook’s flagship, the Jolly Roger, in detailed resin. The Collection produced hand-painted and limited edition sculptures based on Walt Disney characters and scenes. A Royal Doulton Queen Elizabeth II cup will also be available in the sale. This ceramic piece commemorates the coronation of the Queen at Westminster Abbey. View all of these lots and register to bid at Bidsquare