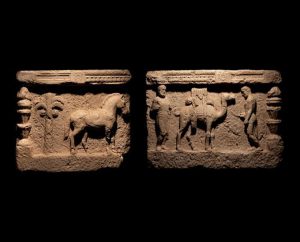 Palmyrene funerary portraits flourished in the Roman era between the second and third centuries CE. These realistic pictures were placed in decorated family tombs outside the city of Palmyra. Illustrating the influences of the Parthian East and the Greco-Roman West, these pieces represent the lifestyle, occupations, and aspirations of the ancient population. The upcoming sale of Antiquities & Ancient Art, presented by Hindman, offers a Palmyrene limestone relief from this period. It depicts a trade between two merchants, one with a camel and one with a saddled horse.

The sale offers over 180 lots of Roman, Greek, and Egyptian artworks and antiquities. Highlighted is a Roman marble portrait head of Caracalla that dates back to the late second century CE. Caracalla was a Roman emperor known for the notorious actions carried out during his reign. This portrait depicts the future emperor when he was elevated to the position of Augustus at age 10. Explore these ancient art items and register to bid online by visiting Bidsquare.