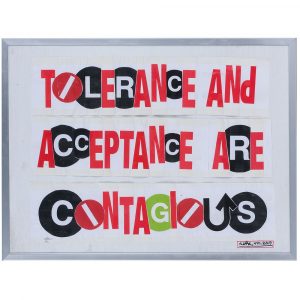 Peter Max is a German-American artist best known for his psychedelic Pop art during the 1960s. The upcoming auction, FRINGE!, is offering 10 Max acrylics on black paper. According to the lot information, each sketch served as a study for a larger, finished piece by the artist.

A collage by Al Diaz is also included in the auction, which is presented by Millea Bros. Ltd. Titled Tolerance, the collage was made and displayed for the anniversary of the 1969 Stonewall riots in New York City. The Stonewall riots were violent demonstrations by the gay community against a police raid that began in the Greenwich Village neighborhood of Manhattan. This 2019 work of art is being sold to benefit 17 Frost Gallery in Williamsburg, Brooklyn.

Other available items include Sonic Youth promotional art, a cased pair of Staudenmayer percussion pistols, and an antique display cabinet. View the entire collection and register to bid at Bidsquare.