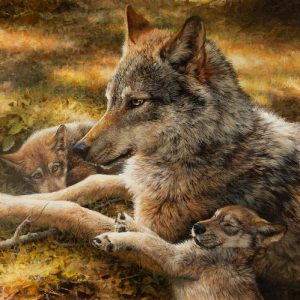 Representing a new generation of painters capturing the American West is Logan Maxwell Hagege, a Los Angeles-based contemporary artist. His works reimagine traditional Western motifs in an angular, modern style. “It’s my vision of the world; that’s where it starts and that’s where it ends,” he has stated. A 2017 painting by Hagege, titled Where Land Meets Sky, will be available in the upcoming Coeur d’Alene Art Auction. Showing two Native American figures on horseback against orange-tinted rock formations, the painting is framed by a turquoise sky. Also of interest is a poplar tree painting by Maynard Dixon, one of Hagege’s influences. The self-taught Western artist was active in the late 19th and early 20th centuries.

This 35th annual Coeur d’Alene Art Auction will present over 260 works of Western and American fine art, both contemporary and historical. Leading the lots is Nomads, an oil painting by Henry Farny. Completed in 1902 after years of both domestic and foreign travel, the piece shows a group of Native Americans crossing a snowy plain. Accompanying the painting is a letter written by Farny to the original owner. The artist describes his feelings about the work: “… personally it pleases me—as one of the most sincere things I have perpetrated in this vale of tears.”

Paintings from Thomas Moran, E. William Gollings, Victor Higgins, and other leading Western artists will also be available. Beyond painted works, a set of portfolios from Edward S. Curtis’ extensive The North American Indian photogravure project will be available. Included are 20 bound volumes from the series with a total of over 1,500 photographs from Curtis’ ethnological studies. Financed by J. Pierpont Morgan, the series has a foreword written by President Theodore Roosevelt. Visit Bidsquare for more information on the mentioned lots and to register to bid.