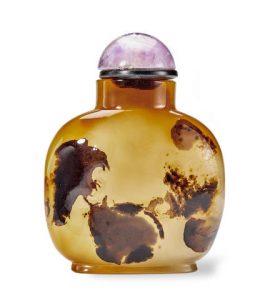 Maitreya is a bodhisattva who, according to Buddhist beliefs, will return to Earth from the heavens when the Buddhist teachings are neglected. The promise of Maitreya’s return and his ability to restore order inspired many to join religious movements dedicated to the bodhisattva in China around the Tang period. A marble torso depicting Maitreya will be available in the upcoming Fine Chinese Paintings and Works of Art sale, presented by Bonhams. A robe envelopes Maitreya and partially covers his muscular torso.

Bidders interested in works produced during the Tang Dynasty can also consider a chestnut-glazed horse featured in this event. Associated at that time with power, a sculpture of a horse would have indicated the owner’s high stature in the community. Those collecting more modern pieces will find a painted scroll by Qi Baishi. Qi’s work combined xieyi, or freestyle techniques, with the more precise and detail-oriented gongbi style. Those interested in this or any other piece can register to bid on the auction house’s website.