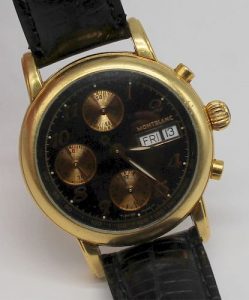 The Fine Art, Silver/Jewelry, Antiques, Asian, and Midcentury auction, offered by Clarke Auction Gallery, will include several important pieces of sterling and jewelry, as well as Asian, midcentury, and decorative arts.

The fine art selection features quality original paintings from old masters and contemporary artists alike. Among the striking and valuable works of contemporary art is an abstract piece by Paul Jenkins entitled “Phenomena Round Numbers.” Jenkins was an American abstract expressionist painter who first gained prominence in the 1950s in both New York and Europe. Jenkins experimented with his paints, pouring pigment in streams of various thicknesses and white linear overlays. Though he was best known as an abstract expressionist, Jenkins would at times call himself an “abstract phenomenist,” prefacing some of his titles with the word “phenomena.” Of his titles, he once said, “I have conversations with them, and they tell me what they want to be called.”

The antiques and decorative arts section of this sale includes oriental carpets, bronzes, lighting, Continental and American furniture, and more. Of the more unusual and rare items is an authentic Davy Crockett Coonskin Cap owned by Fess Parker. He was an American film and television actor best known for his portrayals of Davy Crockett in the Walt Disney TV mini-series.

Also unusual to this auction is a 1985 Alpha Romeo Pininfarina (Spider), a two-seater roadster automobile with front engine and rear drive. The Italian firm of Pininfarina was responsible for the design, manufacturing of the body, as well as final assembly. Just over 5,000 cars were produced in this style in 1985.

View any of these lots and register to bid on Bidsquare.