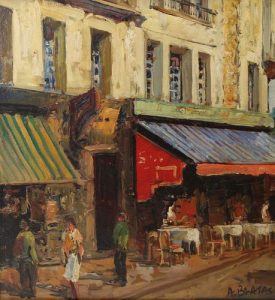 Born in Queens, New York, Reuben Natkian was one of the most influential Abstract Expressionist sculptors of the 20th century. He was admired for his pieces that explored themes of Western art, classical mythology, and the foreground of human consciousness. His bronze sculpture titled Herodias will be presented in the upcoming Fine Art, Jewelry, Midcentury, Antique, and Asian Estate Auction, offered by Clarke Auction. In the Christian Bible, Herodias is known as a Jewish princess who influenced the death of John the Baptist.

This auction of more than 400 items will also include a ceramic work from Pablo Picasso. The artist discovered his passion for pottery in the 1940s and produced ceramics over the next several decades. A blue and white pitcher, one of only 100 editions in the series, is among the lots of interest. The partially glazed piece is decorated with black and blue paint. A Steinway & Sons grand piano, which belonged to a concert pianist, is also available. Browse the complete catalog and register to bid for these items on Bidsquare.