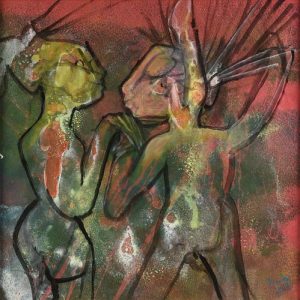 A painting titled Chat-Chat-Chat from Roberto Matta will be offered by Simpson Galleries in the upcoming Fine Art & Antiques sale. Believed to be a portrait of the Chilean artist and his wife Germana Ferrari, the pastel and oil painting from around 1997 shows a courting couple. Matta began his career as an architect but soon realized his love for painting. He eventually joined with Surrealists like André Breton, Gertrude Stein, Marcel Duchamp, and Salvador Dalí.

Raised to be a proper young lady, Dorothy Hood (1918 – 2000) found refuge in drawing. Her painting titled Abstract in Red and Icy Blue is available in this sale. The artist states that when something is acute to her heart or her memory, a shade of it appears on her work. Art historian Robert Hobbs had identified elements of Texas, Mexico, and New York-style art in her drawings. Pieces from artists such as Porfirio Salinas, Frederic Remington, Édouard Cortès, François Gall, Charles Russell, and others are also up for bid. The first two sessions combine 698 lots that will include documents, timepieces, and French, English, and American furniture. View and bid on the entire catalog on Bidsquare.