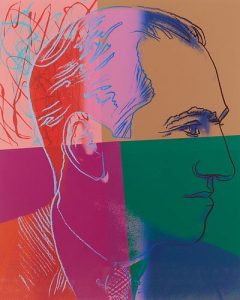 Ed Ruscha is a multi-talented American artist known for his word paintings. As a child, Ruscha wanted to become a cartoonist and received training from artists such as Emerson Woelffer and Robert Irwin. In the1970s, Ruscha, along with fellow artists Jenny Holzer and Barbara Kruger, began incorporating written phrases in his art. During this post-Pop Art period, he also invented Boy Scout Utility Modern– a squared-off and all-caps typeface. Explaining the inspiration for his famous word paintings, a combination of Pop and Conceptual Art, Ruscha states, “I like the idea of a word becoming a picture, almost leaving its body, then coming back and becoming a word again.” The upcoming Revere Auctions event presents a text-based lithograph from Ruscha, titled Cold Beer Beautiful Girls. The words, printed in white, fade into the background.

Also showcased is a porcelain bowl by the prominent potter and painter Adelaide Alsop Robineau. To pursue her interest in art, Robineau started training under William Merritt Chase and later went on to study ceramics under Charles Binns. The available flambé piece features her experiments with glazing techniques and her mastery in ceramics. The auction also offers works by Andy Warhol, Konstantin Korovine, Rudolf Weber, and Jaehyo Lee. Interested collectors can view the full listings and register to bid online on Bidsquare.