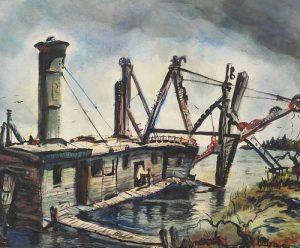 A well-known Haitian painter, Dieudonné Cédor (1925–2010) was a recipient of the Labor Department’s exhibition prize and several other notable awards. His works have been displayed in Mexico, Guatemala, Germany, the Netherlands, Belgium, and Venezuela, among others. The upcoming Exceptional Estates sale, presented by Blackwell Auctions, will feature an oil painting on canvas by this Haitian Modernist. Titled Porteuse de Calbasse (Calabash Carrier), it is an example of Cédor’s expertise in portraying human emotions. Another highlight is an advertising poster for the Ringling Brothers Circus. This 1916 Strobridge Lithography poster is a rare edition printed between 1916 and 1919 that shows only “Ringling Bros” at the top. During this period, they merged with Barnum & Bailey Circus. Posters printed after the merge typically displayed both names.

The auction also features a work from American painter Anna Lee Stacey depicting a woman with a harbor view in the background. To view the complete catalog and register to bid online, visit Bidsquare.