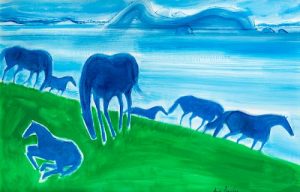 The European, Asian, and American Fine Art & Antiques auction is presented by Shapiro Auctions. The sale includes oil paintings from artists such as Robert Indiana and Andre Brasilier. A late 19th century porcelain-mounted wood vanity with mirror, a late 18th century wooden figure of Buddha Shakyamuni, and other furniture and decorative items are also available in this collection.

Robert Indiana, originally born Robert Clark (1928-2018), was an Indiana artist associated with the pop culture movement. He is best known for his “LOVE” print. His 1964 wood column, titled “Err,” is showcased in this auction. The column and base were designed by Richard Artschwager.

Another highlighted item is an oil painting by Andre Brasilier (b. 1929). This painting depicts blue horses grazing on a green rolling hill with a blue background. Also included is a lithograph titled “Face” by Karel Appel and “Still Life with Bouquet, Grapes, Peaches and Plums,” an oil painting from the 19th Century Continental School. To place a bid, visit Bidsquare today.