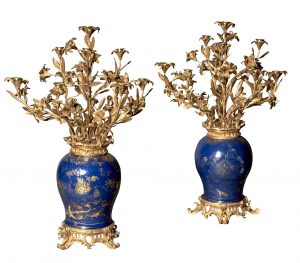 English & Continental Furniture / Old Master / Russian Works of Art Auction offered by Doyle Auction includes a cast by Woerffel modeled after Leonid Posen, an oil painting by Abraham Bloemeaert and much more. Leonid Posen (1849-1921) was a Russian sculptor widely remembered for his monuments to the literary figures of Gogol and Ivan Kotliarevsky in Poltava, Ukraine. As a child, Posen sculpted using moldy bread. Later, as an adult, he mostly used wax, often making the peasant the center of his art. Showcased in this auction is a cast by Woerffel after the model by Posen (circa 1880). This bronze sculpture features a woman seated in an ox-drawn cart loaded with caged ducks.

Also highlighted is a painting by Dutch painter and printmaker Abraham Bloemaert (1566-1651). Bloemaert mostly painted history subjects and landscapes. The oil painting in this auction is titled The Adoration of Shepherds and is dated either 1630 or 1632. It exhibits the Virgin Mary, the shepherds, and a cow looking over Baby Jesus. Included this auction is a George I Irish sterling silver strawberry dish, a George I table clock, and so much more. Register to bid and view all 614 lots at Doyle Auction.