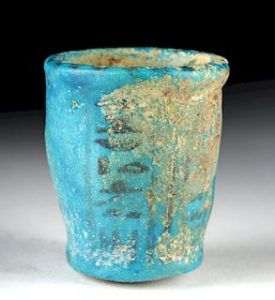 The Romans only called people from the African continent Ethiopians or Nubians. A Roman oil lamp depicting a “Nubian” is the lot with the highest estimated value in the upcoming Early Fall Variety: Ancient & Ethnographic auction, presented by Artemis Gallery. The Romans traded with people across Africa, and this lamp is a stylized version of how they viewed people throughout the continent. Like the Roman oil lamp, this auction’s 780 lots represent life in many civilizations, from the Mayans to the Egyptians.

A Mayan jade pendant, among the lots with the highest estimated value, was an important mineral to the Mayans. Whenever possible, they buried their dead with jade in their mouths. This jade pendant is believed to be a depiction of a Mayan god. However, as Artemis Gallery’s description of the lot indicates, Mayans often mixed features of different gods into the same piece, making it difficult to identify them.

Those interested in ethnographic pieces from Egypt should consider the canopic jar lid. Ancient Egyptians used such jars to carry the deceased’s liver, intestines, lungs, and stomach. The god Imsety is painted on the lid of this jar, one of the four sons of Horus. Those looking for a more affordable Egyptian ethnographic piece should consider the blue ushabti, or Egyptian funerary figure, included in this auction. Artemis Gallery’s description of the lot notes that the blue color represents both the Nile and the afterlife. Register to bid on these lots online on Bidsquare.