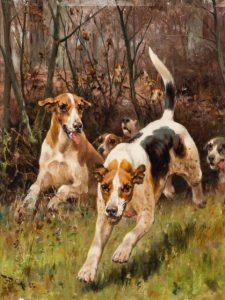 The upcoming Dogs in Art & Sporting Art auction, offered by Doyle, is scheduled to coincide with the Westminster Kennel Club Dog Show, which is an all-breed conformation show held yearly in New York City. The show draws almost 3,000 dogs, thousands of people, and takes place over two days. This auction is anchored by over 100 paintings, most of which depict dogs working and performing the duties of the hunt. One featured painting is Meet of the Royal Buckhounds on Ascot Heath by Richard Barrett Davis, who was an animal painter for William IV and Queen Victoria.

Arthur Wardle is another painter represented in the sale. One of the best-known dog artists of his time, he was sixteen years old when he exhibited his first painting at London’s Royal Academy. Wardle would go on to show 100 of his paintings there. The dog pictured in the available piece, titled Patience, is a terrier patiently waiting for an animal to show itself. Terriers were often used as subjects by Wardle. Setters on the Scent is a painting by Percival Leonard Rosseau, an American artist who studied at the Académie Julian in Paris. Rosseau did not set out to specialize in painting dogs. However, when one of his paintings showing his wife and two Irish wolfhounds was well received by the Paris Salon critics, he began to pursue scenes with sporting dogs in earnest.

Beyond paintings, the featured lots also include a few works of sculpture and jewelry, including a Cartier gold, diamond, and ruby brooch in the shape of a dog. The dog has an onyx eye patch, as well as one diamond eye (on top of the patch) and one ruby eye. The brooch is stamped “Cartier, Paris.” Though most of the lots are focused around dogs, there are also several sporting-related works, including horse sculptures and paintings. Artworks of hunted birds, a set of duck decoys, and a selection of sporting trophies will be presented as well. View any of these lots and register to bid on the Doyle auction site.