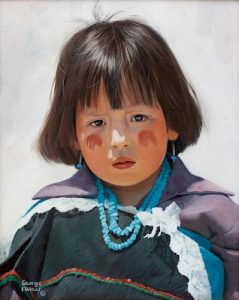 The upcoming Denver Collections auction presented by Hindman features property from the Buffalo Bill Center of the West, including artists and weavers such as Robert Lougheed and Linda Nez.

Lougheed, a Canadian American artist, specialized in works of the American West. He was an illustrator for National Geographic and Reader’s Digest for more than 30 years. He also illustrated several children’s books and has works displayed in the National Cowboy Hall of Fame. Featured in this auction is a Lougheed oil painting titled Winter Was Ending. This painting depicts an armed Native American and two horses standing by some trees, the last of the winter snow on the ground.

Also showcased is a rug by Linda Nez. She is a self-taught, skilled weaver who specializes in pictorial designs. In this sale, her traditional Navajo Teec Nos Pos rug will be particularly highlighted. Other available items include a bust of Geronimo, an oil painting of an Native grandmother, two pairs of child moccasins, and a miniature Navajo loom. View the entire collection and place a bid at Bidsquare.