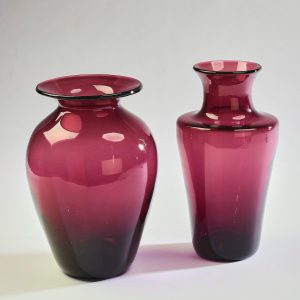 Although Pablo Picasso is recognized for many things, he is perhaps best known for his unwavering eagerness to experiment. From Neoclassicism to Cubism, he participated in a wide variety of artistic styles. In 1946, Picasso visited Vallauris, France for the first time with Françoise Gilot. The town was known for its pottery, and Picasso quickly became enamored with ceramics. Soon, he began producing his own and gifting them to friends and family members. Available on the second day of the May VIP Collection, Online-Only Auction, presented by Great Gatsby’s Auction Gallery, Inc., is a 1953 pitcher by Picasso. Titled Femme du Barbu, the white earthenware ceramic pitcher is colored with engobe and glaze.

Widely celebrated for his Impressionist snow scenes, Walter Emerson Baum used the plein-air style to capture the Pennsylvania countryside. A painting titled Pennsylvania Winter by Baum will be highlighted in this auction. The piece depicts a winding river cutting through a snowy landscape. Several furniture pieces will also be included. Among these is a 19th-century Gothic Revival table. Made from golden oak, the table features an intricately carved apron and four legs with cathedral tracery. Visit Invaluable for more information and to register to bid.