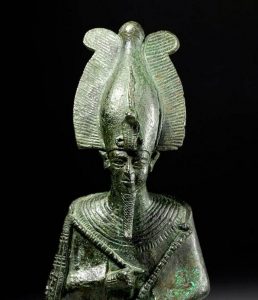 Osiris, the Egyptian god of fertility, vegetation, the dead, the afterlife, and resurrection, was known as the judge of the underworld. He is traditionally represented as an immortal being with a pharaoh’s beard. One of the key lots in the upcoming Exceptional Antiquities, Asian, Ethnographic Art auction, presented by Artemis Gallery, is a tall and elaborately cast Osiris bronze figure. This piece has a round face, almond-shaped eyes, thick lips, and large ears. This ritualistic figure was most likely used for prayer ceremonies in prosperous homes or temples. The figure wears an Atef crown and shroud while holding a flagellum and a heka scepter. These are significant symbols of kingship in Egyptian culture.

Another notable lot is a fossilized Hoplophoneus skull with large teeth. Most of the lower jaw is in its original condition. This species is the second oldest sabertooth mammal, dating back to prehistoric North America. One of the auction’s fine art highlights is a portrait of John F. Kennedy by William Franklin Draper. The artist was given the rare opportunity to paint Kennedy from life. The available painting shows Kennedy in a rocking chair and comes in a gilt frame. To view the complete catalog and register to bid online, visit LiveAuctioneers.