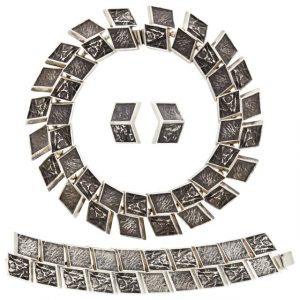 Also on offer is William Harper’s Firebird brooch. Harper began his career as an abstract painter. He later switched to enameling before finally moving to jewelry making. Harper combines enamel, fine gold, and non-traditional materials like baroque pearls, scarabs, and bones in his creations. The pear-shaped Firebird brooch dates back to 1994. It features a baroque pearl and enamels in various colors. Jewelry pieces from Bulgari, Pablo Picasso, Cartier, and Van Cleef & Arpels round out the sale’s offerings. Those interested in these or any other pieces can view each lot on Doyle.