Book Auction of the Collection of Don Lorenzo Zambrano 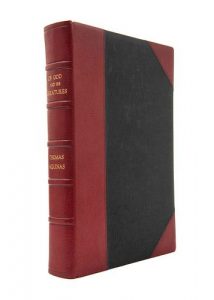 Don Lorenzo Zambrano was a Mexican engineer, businessman, and book enthusiast. His library included over 40,000 titles on a variety of subjects. The upcoming 251-lot auction of items from Zambrano’s collection, presented by Morton Subastas, is a sampling of the depth and breadth of his tastes. Included are several installments from the James Bond saga by Ian Fleming, including a lot pairing first edition copies of The Man with the Golden Gun and You Only Live Twice. The former work is the first British edition with a gun stamped in gold on the cover, of which only 1,000 copies were produced for export.

Other rare books include titles from the Limited Editions Club, which are illustrated and bound in leather. Some of the Limited Editions Club books on offer include Ernest Hemingway’s The Old Man and the Sea, Mark Twain’s The Adventures of Tom Sawyer, and Lewis Carroll’s Through the Looking Glass. There are also many works of science fiction, as well as non-fiction titles about performing arts, sports, economics, and more. Find any of these lots and register to bid on Bidsquare.