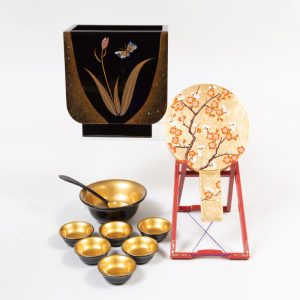 During Japan’s Edo Period, merchants and artisans began making more money but were still confined by a strict class system. Many chose to spend their new-found wealth on entertainment. This included ukiyo-e paintings and woodblock prints, which portrayed actors, sumo wrestlers, and erotica. An album of actor portraits in the ukiyo-e style is among the highlighted pieces in the upcoming Asian Online auction, presented by Stair. The 150 portraits are by Utagawa Kunisada, who also produced book illustrations.

Representing China in this event, among other lots, is a huanghuali brush pot. The pot is made from the yellow-red wood of the huanghuali tree. Pieces made of this wood were sought by royalty and the upper-class during the Ming and Qing dynasties. Collectors of Chinese ethnographic pieces will also find a ruyi scepter. At different points in history, ruyis were used as talismans for good fortune, ceremonial items for Buddhist rituals, pointer sticks for lectures, and backscratchers. View each of these lots and register to bid online on Bidsquare.