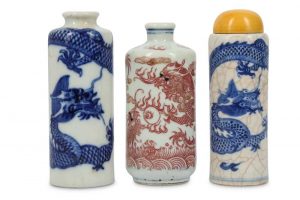 The ‘hundred boys’ theme was very popular during the Qing and Ming dynasties. The ‘hundred boys’ refers to King Wen of the Zhou dynasty, who had 99 sons and adopted one more to have an even 100. Later, the theme was used to represent the desire for many sons to continue the family line. The upcoming Asian Art, Including Chinese Paintings auction, presented by Chiswick Auctions, features an Imperial Chinese hundred boys lantern vase. The piece shows images of children imitating adults, indicating the ambitions of the literati class for their sons to achieve high intellectual status and future success.

Another key lot is a luduan incense burner. The luduan, or Chinese unicorn, is a mythical beast that can detect truth. It is usually placed in pairs at either side of the imperial throne to indicate the keen intelligence and excellent judgment of the emperor. The auction also features Japanese woodblock prints by Oju Yoshitoshiga. The vertical diptych depicts Kintaro riding on a giant carp in the water. Interested collectors can explore the full listings and register to bid online on Chiswick Auctions.