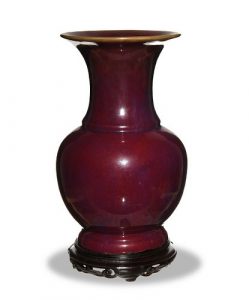 Blue-colored ceramics gained significance in China during the Tang dynasty. The blue-glazed porcelain pieces got their distinctive color from cobalt, imported from Persia. At the time, cobalt was scarce and only used in limited quantities. Blue and white pottery and porcelain gained broader recognition during the Qing dynasty. A pair of blue and white porcelain bowls are among the featured items in the upcoming Asian Art & Antiques – Ceramics and Works of Art sale, presented by Oakridge Auction Gallery.

Flambé glaze, popularized during the Qing dynasty, is also highlighted. The emperor at the time, Yongzheng, commissioned potters at the imperial factory to recreate the Jun ware of the Song dynasty. However, instead of recreating the classic Jun ware, the potters accidentally produced a new glaze with red and blue streaks. An Imperial Chinese flambé vase with a Xianfeng mark at the bottom is a featured lot. The vase has a quatrefoil-shaped mouth and bears relief impressions of a peach on the front and back. Completing the auction is an early 20th-century Yixing teapot with a lion on the lid. To view these items, visit Bidsquare.