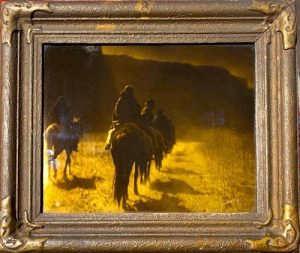 Originally from Wisconsin, Edward Sheriff Curtis eventually settled in Seattle. Around 1895, Curtis began to photograph Native Americans in the Northwest. The trips fueled his interest in Native culture and Curtis began documenting as many North American tribes as he could. One photograph from a trip to a Navajo settlement near Chinle, Arizona is among the highlighted lots in the April Auction of Collections & Ephemera, presented by Neue Auctions. Titled The Vanishing Race, the photograph shows Navajo Indians on horseback riding away from Curtis’ camera.

Pierre-Joseph Redouté holds a central position in the development of European botanical artwork. Redouté’s patrons included Marie Antoinette, Empress Josephine, and her successor, Marie-Louise. Three illustrations from his book Les Liliacées, which he issued while under the patronage of Empress Josephine, are featured in this sale. Beyond fine art, the auction also offers books. These include Helen Bannerman’s Little Black Sambo. Bannerman wrote the story in 1898 for her daughters while traveling through India. Interested collectors can register to bid online by visiting Bidsquare.