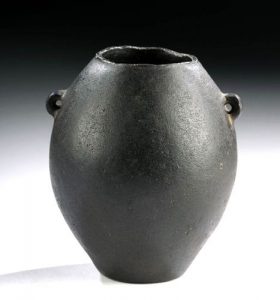 The first Russian icons appeared in the 12th century. During the same period, the tradition of covering icons with metal barriers called oklads was also popularized. An oklad usually covers the entire icon except the face, hands, and feet. Typically, it is more than a decoration and a shield against sunlight and damage. Each material used for making an oklad has a deeper meaning: gold symbolizes God’s grace, silver stands for purity of the soul and holiness, and gems point at spiritual virtues. A key lot in the upcoming Antiquities | Pre-Columbian | Ethnographic sale, presented by Artemis Gallery, is a Russian Cosmas and Damian oklad. The 19th-century silver oklad shows two brothers holding medicine boxes and crowned with sunburst halos.

A first-century CE Egyptian situla is highlighted in the sale. The situla, a conical vessel with a pointed base and tall body, played an important role in ancient Egyptian religious ceremonies. Situlae were typically formed from either bronze or hardwood and featured raised decorative motifs of animals or deities. The available piece is hand-carved from honey-yellow alabaster with subtle inclusions of light gray and dark beige.

The auction offers 200 lots of decorative arts, jewelry, and ethnographic art. A bronze sculpture by Karen Crain will be offered as well. Titled Chaste, the sculpture shows a woman holding a long towel or robe against her body as she walks forward. Visit Bidsquare for more information and to register to bid.