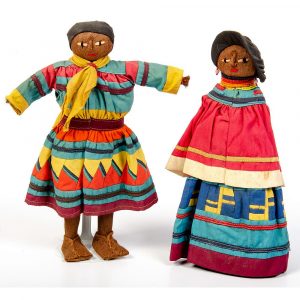 Edward S. Curtis devoted his life to documenting the experience of Native Americans across the West. Several photographs produced by Curtis are available in the American Indian Art timed auction, offered by Cowan’s. Like Curtis’ photographs, each of the auction’s 273 lots offers a look into the lives of Native Americans across the continent, from the Plains Indians to the Great Sioux Nation.

Among the photographs by Edward S. Curtis available in this auction is “The Vanishing Race”. In the photograph, a group of Native Americans travels away from the camera’s view. Throughout his career, Curtis was aware that he was documenting a disappearing culture. “The mode of life of one of the great races of mankind,” writes Curtis in his 1907 book The North American Indian, “must be collected at once or the opportunity will be lost.”

Ethnographic pieces from the tribes of the Great Sioux Nation are among the lots with the highest estimated value. This includes a late-19th century beaded tobacco bag. The bag not only gets its color from its beads but also quills and tin cone bell embellishments. Those interested in lots from the Great Sioux Nation should also consider the Sioux beaded hide saddlebag. The bag is decorated with light green and red beads, as well as fringes. Those interested can register to bid on bidsquare.