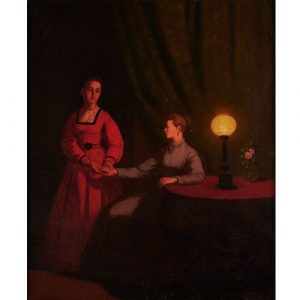 The upcoming auction, presented by Millea Bros., features several Afghan and Persian rugs. Among the highlighted items is an Oushak carpet from the early 20th century. Made in the town of Oushak, these rugs are known for their Persian influences and hand-finished details. The available decorative carpet is decorated with red and gold leaf motifs surrounded by an ivory border.

In the category of classical antiquity, collectors can find an Egyptian ushabti pottery piece. Ushabti figures are often found in ancient Egyptian tombs. According to traditional burial practices, the ushabti represents a servant figure who would serve the deceased in the afterlife. This ancient art most likely dates back to 400 to 300 BCE. Another featured piece is an oil painting attributed to Johann Mongrels Culverhouse. Best known as a ‘candlelight’ painter, Culverhouse’s works often feature night scenes illuminated by candlelight. Executed in 1868, this painting depicts two women holding hands under the light of a candle. View each of the lots and register to bid on Bidsquare.