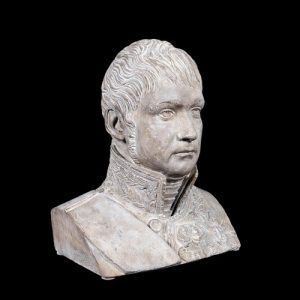 An Anglo-Hungarian painter, Philip Alexius de László (1869 –1937) was best known for his portraits of royal and aristocratic personalities. In 1900, he married Lucy Guinness of Stillorgan, County Dublin, and became a British subject in 1914. One of the highlights in the upcoming White Oaks: Single Owner Auction, presented by Ahlers & Ogletree, is a László portrait of “The Honourable Mrs. Philip Leyland Kindersley,” née Oonagh Guinness. The painting depicts the Anglo-Irish socialite, one of the three “Golden Guinness Girls” and daughter of Arthur Ernest Guinness, wearing a white chiffon dress while holding a wide-brimmed hat. Another key lot is a pair of Chinese Ming dynasty monumental guardian lions. The seated Buddhist lion figures are designed with ochre, turquoise, and aubergine glazed tiles. The female has a cub under her right paw and the male’s left paw rests on a ribboned brocade ball. Each one is raised on a separate waisted plinth with molded panels of horses and lotus lappet borders.