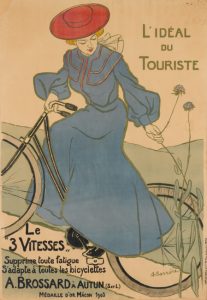 The upcoming auction of Vintage Posters, offered by Swann Auction Galleries, features a number of Art Nouveau posters by renowned artists of the early 20th century. Several featured works were designed by Alphonse Mucha, a Czech painter, illustrator, and graphic artist known for his stylized theatrical posters. Highlighted is his Cycles Perfecta poster, advertising a British bicycle company. A woman in a flowing orange dress is shown leaning over the handlebars.

Also among the key lots in this sale is a collection of over 350 posters by Puerto Rican artists. The set includes images from five decades of Puerto Rican graphic art and was amassed by an American college student in the 1970s. Also up for bid is an illustration by Henri de Toulouse-Lautrec. He was working on a design for Simpson, a British bicycle company, meant to advertise the company’s new bicycle chains. Simpson rejected his poster, saying the pedals were not accurate. Toulouse-Lautrec had 200 copies printed at his own expense, and one of those copies is available in this auction. View any of these lots and register to bid on Invaluable.