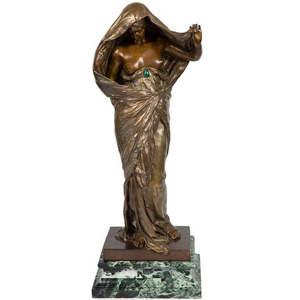 The second day of the upcoming International Fine & Decorative Arts auction, presented by Shapiro, offers a selection of over 500 lots. The event includes sculptures, paintings, and modern furniture. An 1880 sculpture by Louis-Ernst Barrias is among the key lots. Titled Nature Unveiling Herself before Science, the bronze sculpture measures 65 cm tall. It depicts a feminine figure, draped in fabric, gazing downward.

Another featured lot is a painting by Russian artist Vladimir Ovchinnikov. The oil on canvas is titled Motorcycle and depicts a nude sphinx and a motorcycle rider. The artwork is signed, dated, and titled on the back. A Russian Fabergé-style silver and shaded cloisonné enamel serving dish from the late 20th century is also available. Jewelry and decorative items round out the sale. Interested bidders can view the entire catalog or place a bid on Bidsquare.