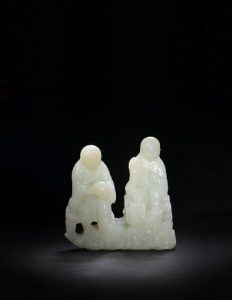 According to a Chinese legend, Hanshan and Shinde lived during the Tang dynasty and were close friends who fell in love with the same girl. When Shinde realized this, he abandoned all worldly pleasures to become a monk. Hanshan joined his friend in monkhood. Known as the holy He-He Er Xian, the symbol of the two friends together went on to represent harmony and mirth. Their statue is often gifted to newlywed couples to bestow blessings of unity. A Chinese white jade He-He Er Xian statuette from the 18th century is available in the upcoming Winter Fine Asian Art and Antique auction, offered by Oakridge Auction Gallery.

Several other artifacts of Asian provenance will be available in the event. A Chinese Chenxiang ruyi scepter dating from the 18th century is also available. The piece is carved with the Eight Immortals, a group of legendary figures in Chinese mythology. Another featured lot is a Chinese two-piece bronze vase with gold inlay. The vase features a pair of chilong handles. Browse the entire catalog or register to place a bid on Bidsquare.