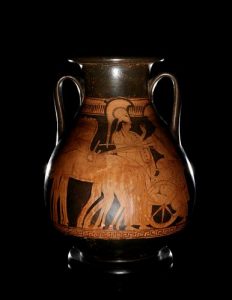 In Greek mythology, a prophecy foretold that the son of Zeus would defeat his father and take his throne. Afraid the prophecy might come true, Zeus swallowed his pregnant wife Metis. Athena was later born from Zeus’ head. The goddess of wisdom, war, and crafts, Athena was worshipped as one of the Olympian gods. A red-figured ceramic container depicting Athena on a chariot will be presented in the upcoming Antiquities, Islamic, & Indian Art event, presented by Hindman.

Other notable lots include a bronze figure of a striding Neith. An ancient warrior goddess, Neith was believed to be the maker of the universe and the mother of the sun, according to Iunyt (Esna) cosmology. She was worshipped in Egypt from the beginning of the Predynastic era through the Roman rule. The available figure dates back to 664-343 BCE. Bidders can also consider a marble portrait of Empress Faustina and a late Hellenistic bronze arm sculpture. To view the complete catalog and register to bid online, visit Bidsquare.