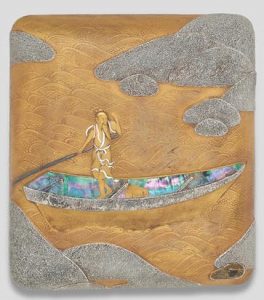 Bonhams’ upcoming sale of Chinese and Japanese art will highlight a Japanese suzuri-bako and matching bunko box made in the style of Ogata Kōrin. Known for his paintings on ceramics, Kōrin was a lacquerer of the Rinpa school. Dating back to the 18th C Edo period, these pieces were inspired by Kōrin’s preference for luxurious materials and careful attention to detail. These inkstone and document boxes are decorated with gold lacquer and shell inlays that tell stories on their covers. Several other traditional Japanese boxes will also come under the hammer in this auction, including a suzuri-bako depicting a flock of geese in a dense marsh.

Katana collectors will find notable examples in the listings. Among them is an Awataguchi katana crafted by 17th-century smith Asai Omi no Kami Tadatsuna. The founder of a prominent Osaka Shinto school, Tadatsuna’s blades were known for their traditional shape and cutting ability. The available katana bears gold spiderweb accents with dew-laden leaves. Chinese art in the event includes a selection of jade figurines. A kneeling deer is particularly notable. Likely carved during the Six Dynasties period (222 – 589 CE), the animal is shown glancing over its back to symbolize immortality. This particular pose would be considered unusual for its time. Find the full catalog of Chinese and Japanese art and place a bid on the Bonhams website.