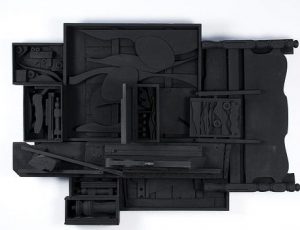 While looking at Louise Nevelson’s works, one onlooker commented on the creativity required “to make something beautiful out of nothing.” Wooden scraps like dowels, spindles, and furniture parts fill stacked boxes of Louise Nevelson’s Sky Cathedral (circa 1958). The sculpture, her first in black, is now hosted by the Museum of Modern Art in New York. Barridoff Galleries’ International Fine Art Sale brings two of Louise Nevelson’s major pieces to auction in February. Moon Zag III showcases her fascination with the color black.

Another sculpture with notable black elements is John Bisbee’s Large Circle. Hammered and twisted steel nails are welded together to form a big circle. About the medium he uses for his sculptures, Bisbee says, “Anchored only by its form and materiality, I revelled in the nail’s infinite possibilities.” Other notable artists in the sale include Pablo Picasso, David Hockney, Andy Warhol, Amos Ferguson, Anthony Thieme, Louis Schanker, and Wolf Kahn. This fine art auction also offers curated items from Dahlov Ipcar, Carl Sprinchorn, Neil Welliver, Elena Jahn, Robert Indiana, and Marguerite. Rounding out the catalog is a selection of photographs, including Edward Weston’s Pepper P38. This piece was widely exhibited in the Netherlands in the early 1950s. Find the full catalog and place a bid on Bidsquare.