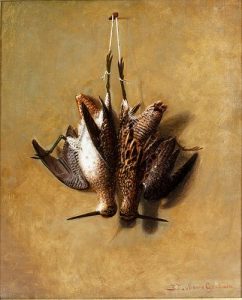 Donal C. O’Brien, Jr., the former chairman of the National Audubon Society, had a special passion for hunting and fishing. Because of this love, he acquired an enormous collection of duck decoys, including those by Charles F. Coffin. Works from Coffin and Franklin Folger, Jr. are among the most notable Nantucket decoys on the market. In Copley Fine Art Auction’s upcoming event is an 1870 three-piece curlew decoy with stippled paint by Coffin. This hollowed decoy is paper-thin, and the body of the bird resembles the island of Nantucket.

Ogden M. Pleissner was an American artist known for his landscapes and paintings of hunters with their game. In this auction is his 1940 watercolor inscribed to W. Howard Cox, who was the head of Union Central Life Insurance Company, an economic advisor to seven presidents, and a sportsman. This piece, titled Quail Hunting, shows two men with their dogs hunting in a field. The inscription reads “To W. Howard Cox, With best wishes” in the lower right corner. View the entire catalog and register to bid for these items by visiting Bidsquare.