The Art of China: Featuring the Arnhold Collection 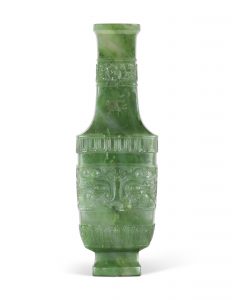 Private collectors often amass an impressive amount of art in their lifetime. The Art of China auction, presented by Christie’s, primarily contains Chinese figurines, vases, and plates from the collection of the late Gerard Arnhold. Arnhold was a German-Brazilian entrepreneur whose contributions to the arts include serving as the president of the Dresden Philharmonic Society.

Among the pieces with the highest estimated value is a jade vase from the early 20th Century. Flower heads decorate the neck of the vase, and animal masks appear on each side. Another notable jade piece is a Guang (vessel) from the 17th or 18th Century. The vessel is a much paler jade than the previously-mentioned vase. The Guang is in the shape of a dragonfish’s mouth.

Figurines are also a prominent part of the auction, including a bamboo carving of Shoulao. In this carving Shoulao, the Chinese god of longevity, wears long robes and holds a peach branch. Another figure in this auction depicts Liu Hai, a 10th-Century Chinese alchemist. In his bamboo carving, a long open robe reveals his big belly, a sign of prosperity. Interested bidders should note that lots 1-78 will be auctioned on September 4th, and lots 79-220 on September 5th. View each lot and register to bid on Christie’s website.