The Americana Painted Collection of a New York Gentleman 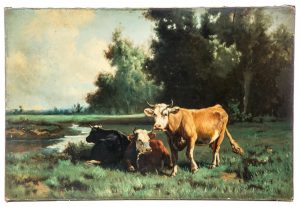 The upcoming Americana Painted Collection of a New York Gentleman offered by Garth’s Auctioneers & Appraisers offers insights into American culture. The auction features a wide array of furniture, fine art, decorative art, dolls and toys, and more. An 18th century gumwood piece is featured in this sale. Made in Long Island, New York, the cabinet has a red wash and ebonized feet. The top half has a raised panel construction, while the lower drawers are diamond paneled.

Also highlighted in the auction is a Pennsylvania winter scene painting by Walter Emerson Baum, from around 1917. Widely celebrated for his Impressionist snow scenes, Baum belonged to an esteemed group of artists known as the artists of the New Hope school or the Bucks County Impressionists. Using the en plein air technique, Baum captured the Pennsylvania countryside and farmland with thick brushwork and bold colors. The sale also features several weathervanes. A late 19th century cow weathervane in copper by Boston’s Harris & Co. is among the notable lots. Additional pieces include an American redware face vessel with a handle and pouring spout, a gameboard with a painted checkerboard, and a sand bottle by Andrew Clemens. The latter depicts a fisherman, an eagle, and an American flag. Explore the full listings and register to bid online on Garth’s Auctioneers & Appraisers.