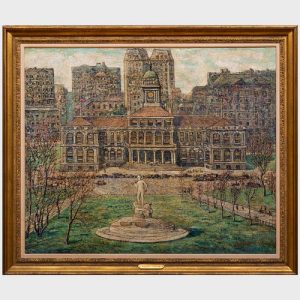 A street painting by Ernest Lawson (1873 – 1939) will lead Stair’s upcoming Americana auction. The charm of American Federal-style architecture is captured in this painting. It depicts New York City Hall’s front façade along with a nearby park and a monument. Often called a Romantic by contemporaries, Lawson painted a now-vanished American landscape. Another key fine art lot in the auction is a set of 27 woodblock panels by the Zuber Manufactory. The panoramic scenes depict North American landscapes like the Natural Bridge of Virginia, Niagara Falls, New York Bay, West Point, and Boston Harbor.

The upcoming Americana sale will include a selection of furniture as well. A Federal mahogany linen press is particularly notable. Pierced cresting and an eagle finial decorate the upper section. The lower half has four inlaid graduating drawers and stands on bracket feet. Collectors of Americana can find 320 lots of art, weathervanes, patchwork quilts, needlework, sculptures, watches, and more in this sale. Visit Bidsquare to view the catalog and place a bid.