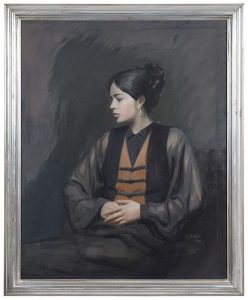 Katsushika Hokusai, a Japanese ukiyo-e artist of the Edo period, produced his most important work after the age of 60. He was a member of the Nichiren sect of Buddhism and his religious beliefs considerably influenced his work.  Hokusai’s series titled Thirty-six Views of Mount Fuji, which he created between 1826 and 1833, depicts the mountain from various locations and seasons. Two paintings from this series are available in the upcoming Specialty Auction, presented by Brunk Auctions. These works were created using the Japanese technique of woodblock printing.

Several collectibles, jewelry pieces, and works of decorative art will also be on offer, including a Chinese blue and white peach-shaped wine pot that comes to auction for the first time. It has a possible provenance linking it to the Ming Dynasty and displays symbols of fruit, flowers, and leaves. Browse the entire catalog and register to bid online by visiting Bidsquare.