Sculpture from the Collection of George Terasaki 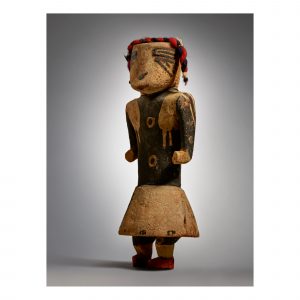 Sotheby’s is offering Sculpture from the Collection of George Terasaki, an auction highlighting the Indigenous cultures of North America. The Terasaki Collection is centered on the people of the Northwest coast and the pueblos of the Southwest. Masks, sculptures, and pieces of decorative art created during the 18th and 19th centuries will be available. A featured Tsimshian portrait mask and raven rattle were previously in the collection of the Heye Foundation in New York. The Tsimshian are Indigenous people from coastal British Columbia and southern Alaska. Also from southern Alaska is a Chugach mask that dates from the 18th century or earlier.

The collection also includes kachina figures from the Hopi and Zuni people of the Southwest. These carvings were formed in the likeness of religious spirits, found in the culture and beliefs of those communities. The spirits represent aspects of life in the human world and serve as links between the people and the land. Many of the kachina figures in this auction have been displayed in the published literature on the subject. View any of these lots and register to bid on Sotheby’s.