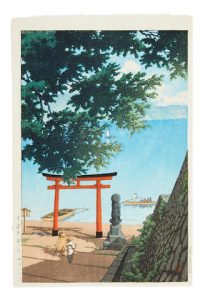 The simplicity of white porcelain caught the eye of Korea’s aristocracy and upper class in the 15th century. Demand became so high for the porcelain that makers eventually sprouted up across the peninsula. Several examples of these pieces are available in the upcoming Fine Japanese and Korean Art auction, presented by Bonhams. This includes a porcelain moon flask from the 16th or 17th century. These flasks gained their shape by fusing two dishes with clay and then sculpting the base and mouth. Another example available in this sale is decorated in an iron underglaze with flowers.

Among the lots representing Japanese culture is a complete suit of armor from the Edo period. Tatami gusoku was a type of armor used by the samurai. As the word tatami, or “to fold,” suggests, such armor was designed to fold up for easy maneuverability. This example includes several key embellishments, including yak hair on the helmet and a family crest unique to the wearer. Those interested in this or any other item can register to bid on the Bonhams website.