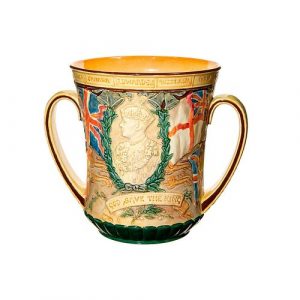 Lion & Unicorn’s upcoming two-day sale will feature a wide selection of Royal Doulton collectibles. The first day of bidding will bring over 500 lots to auction, including a Royal Doulton loving cup made in 1937 to mark the coronation of King Edward VIII of the United Kingdom. Under the direction of Doulton’s Charles Noke, the loving cup style was created to honor historical and cultural heroes. The available King Edward VIII loving cup shows the young ruler on the front, surrounded by the flag of the United Kingdom and the national flag of England. Along the rim are the names of Britain’s former colonies, including Canada, Australia, Kenya, and India.

Also among the Royal Doulton items on offer are large character jugs and miniature figurines. Royal Doulton character jugs have been in production since the 1930s. The upcoming auction will present mugs resembling both real and fictional figures, including all four members of the Beatles and the storybook character of Robin Hood.

Those interested in flambé glazes will find Royal Doulton flambé vases with dark nature scenes against blood-red backgrounds. One of these pieces shows the outline of Omar Khayyam, a Persian philosopher, poet, and mathematician. This particular vase was the handiwork of Charles Noke. Find additional details about this auction and place a bid on Lion & Unicorn.