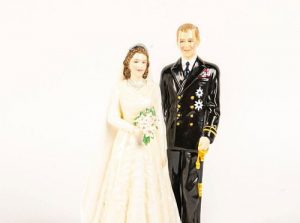 This December, Lion and Unicorn’s upcoming auction offers a variety of ceramics, bronzes, and figurines. Over 550 lots will be available, including a collection of Royal Doulton figurines. Founded by John Doulton, Royal Doulton entered the ceramics industry as a small pottery shop in Vauxhall, London in 1815. It launched various products over the years— from ornamental vases to stoneware figurines. Royal Doulton later collaborated with a young artist, Pauline Parsons, whose designs would lead the company to global recognition. Her popular works include salt-glazed stoneware and terracotta figurines of royalty, maidens, and military men. The lot available in the sale is a strong example of her work. It depicts Queen Elizabeth II and Prince Phillip on their wedding day.

A hand-painted Art Deco figurine is another highlighted lot. The piece shows a seated woman with two black Scottish terriers. A 1989 figurine of Mary, Queen of Scots is also showcased. This piece comes from the Queens of the Realm series, which was commissioned in 1986 to honor some of the most memorable queens in history. Interested collectors can explore the full listings and register to bid online on Bidsquare.