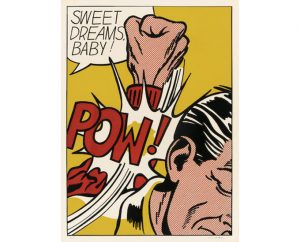 Bonhams’ upcoming sale will present an important contemporary print from Roy Lichtenstein, a leading figure in the Pop Art movement. In the available Sweet Dreams Baby! print, Lichtenstein employs his signature Benday dots technique. The method is primarily used by comic strips and newspapers to indicate texture. According to the lot essay, “The combative phrase and cartoonish figure of a man on the receiving end of a knock-out punch are meant to deliver a warning, albeit humorous, that [the artist] planned to rewrite the rules of painting, and indeed of printmaking.”

The Modern & Contemporary Prints & Multiples auction also spotlights Andy Warhol’s Rebel Without a Cause. Warhol’s prints often explore commercial culture. The available piece shows James Dean, an American actor, posing beside a line of Japanese script. The actor’s outlined figure is set against a bright red backdrop. A faint, repetitive image of James Dean can be seen in the center as well. To view the full listings of modern and contemporary artwork and register to bid, visit Bonhams.