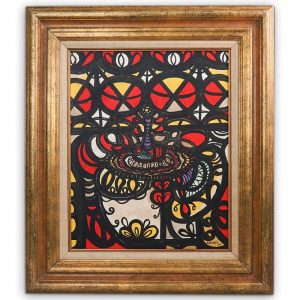 Akiba Antiques’ latest Eclectic Collection of Estates Worldwide sale includes nearly 650 lots from across several categories. Featured in the auction is a René Lalique glass vase produced in the 1920s. René Lalique began making vases at the turn of the 20th century after already achieving success as a jewelry maker. Birds with spread wings, shown swooping down towards several archers, decorate this particular vase.

Decorative art collectors can also consider a 183-piece flatware set in its original mahogany display case. The set was produced in Peru by Carlo Mario Camusso’s silver company. An immigrant from Italy, Camusso eventually controlled most of the silver production in Peru by the start of the 20th century. This set contains, among many other pieces, 12 ice cream spoons, 24 dinner knives, and utensils specifically for serving cake.

Meanwhile, the highlighted fine art lots include an untitled painting by Cuban artist Amelia Peláez. Although schooled in French neoclassical art, Peláez gravitated towards abstraction and the Modernist movement in Europe. The untitled piece available in this auction has a warm color palette and a geometric pattern. Those interested in this or any other piece can register to bid on LiveAuctioneers.